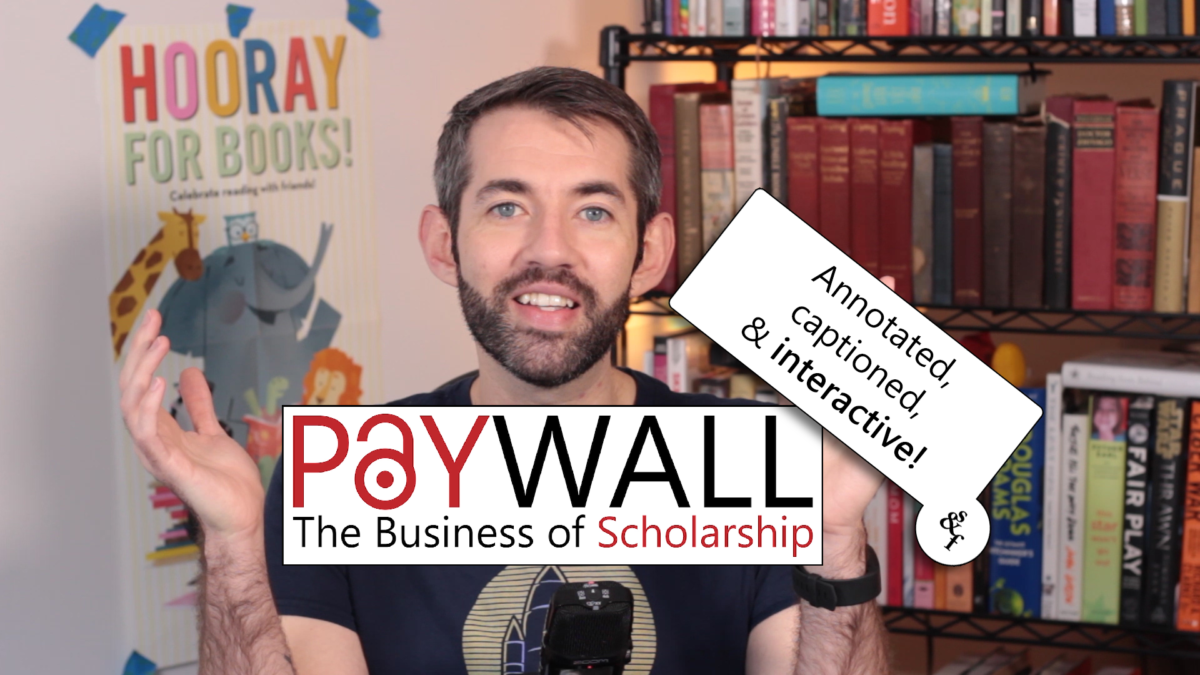 (Note: this week’s post is  a retrospective on my experimenting with a new function on YouTube called YouTube Premieres. The aim is to give other librarians an idea of how they can use it for their institutions and what goes into it.)

Since October 22-29 was Open Access Week,  UBC Library decided it might be cool to screen Paywall: The Business of Scholarship. (okay so it’s because I casually tweeted to them when it came out). Copyright librarian Stephanie Savage reached out to me to coordinate it, and on Monday the documentary was screened in IKB, with ~15 folks–a mix of librarians and profs–in attendance.

While the turnout wasn’t too bad, I was a little disappointed that it ended up being mostly a “preach to the choir” kind of event — the folks who showed up were the folks who already knew that there was something wrong with the scholarly publishing environment, so it didn’t seem to me like the screening had as much impact as it could have if, say, students had been in the room. So while I was glad that folks showed up, I was also a little bummed.

But later that night, a thing (or rather, a bunch of things) occurred to me.

First: YouTube announced YouTube Premieres that same day. It’s a new feature that lets creators to upload a video and schedule it to go live at a specific date and time, allows viewers to sign up for reminders & chat with each other. Then, when the video premieres, everyone who’s “tuned in” can chat with each other as the video premieres. This chat is then saved, and unrolls with the video for future plays so that everyone who watches it after the Premiere can get to experience it as if they were there for the premiere.

Second: It occurred to me that UBC Library was able to screen the documentary only because it’s published under a CC-By license… And that same license meant that I could take it and do with it what I pleased as well, as long as I attributed it.

Third: I thought of my own subscribers, and the fact that they might like the documentary as well — but a lot of the material in it wasn’t necessarily at an entry level for people outside of academia (or even necessarily librarianship).

And from all of this, I got the idea that I could do my own screening of it in  a way that could make a meaningful connection between the documentary, experts in the field, and laypeople. So that Monday night right before going to bed, I sent an email to a bunch of folks in Scholarly Communications to see if they’d be interested in being available for a screening, downloaded a copy of the documentary to my computer, and went to bed.

When I woke up Tuesday morning, I’d heard back from some folks I was in touch with at City University of London’s Department of Library & Information Science (CityLIS) through Twitter. I’d also started to get responses from UBC Librarians so I roped them in with a trusty Doodle poll.

I knew that time was somewhat of the essence since the following Monday was the official last day of Open Access Week, and I wanted to take advantage of folks paying attention to Open topics generally. So I spent most of Tuesday drinking coffee and editing the film to add annotations that broke out acronyms, as well as tracking down and overlaying the interviewees’ Twitter handles so that viewers would be able to track people down if they had questions.

The editing of all of this itself took the better part of the day, so once my eyes started bleeding I called it quits and headed to the iSchool to get some work done, where I promptly couldn’t shut up about how excited I was to anyone who would listen. Thanks very much to Drs. Julia Bullard, Heather O’Brien, Eric Meyers, Erik Kwakkel, and Luanne Freunde for being very patient with me in my excitement.

Wednesday rolled around, so I got up early-ish and filmed the intros/outros to give folks some important context to what were about to watch. I edited everything together, rendered the video and started the upload process, and pinned down more details with folks. I discovered that my people at SPARC didn’t get back to me because they were at the United freaking Nations screening the documentary, and also likely preparing for OpenCon, which I was flying to the following week too.

Once the video was uploaded, I went into full promotion mode. I emailed links to Drs. Lyn Robinson and Ludovica Price at CityLIS, Cable Green at Creative Commons, and SPARC’s Libraries & OER Forum (a mailing list for what it sounds like it would be a mailing list for). I emailed Elsevier to see if they wanted to tune in or provide a comment. I emailed my contacts at YouTube to let them know what I was doing, because I was pretty sure that this was going to be a great use case for the new Premieres functionality.

I tweeted everyone I knew who I thought might be even peripherally interested, including YouTubers I knew who had an interest in stuff like this and also major presences online. I emailed the faculty at the UBC iSchool who I’d gushed to the day before to let them know it was happening. I talked to a lot of people, and went to bed very tired.

Thursday is the one day of the week that I have class, so I did that and took the opportunity to respond to emails that were now coming in support. People were getting back to me from all over saying that they were excited to see how it would go, and letting me know they’d be there, and so in my free time I rushed to get back to everyone to answer questions. I also submitted it that evening to UBC iSchool’s newsletter while coordinating with the communications people there to get it promoted on social media.

I also tracked down the captions for the documentary and added them, because I think accessibility is important.

I replied to emails and rested. By Friday, I’d probably put in 40 hours of work editing, emailing, contacting, and coordinating — on top of my regular work and student duties — and I was very tired. (Incidentally, my partner and I went to a screening of a couple of episodes of Buffy the Vampire Slayer on Saturday including “Once More, With Feeling,” a musical episode that I am happy to brag that I know all of the words to all of the songs to. Now you know.) But by Sunday, everything was ready and I didn’t have much to do other than wait for Monday morning to roll around!

On Monday morning, the Premiere went live and I had 20 people consistently in attendance the entire time, with 60 people who showed up throughout. And in every measure, it was a wild success!

I had people from multiple countries, states, and provinces in attendance. I had librarians, scholarly comms experts, and LIS PhD’s in the house, as well as folks who were just regular laypeople that were curious about the documentary. We had a lot of great discussion with people asking and answering questions in the chat, and in the end we turned it from just another screening to a collaborative effort that was greater than the sum of its parts.

As of (updated) November 7th, the documentary has had 228 views — enough to fill a small auditorium — and it keeps ticking up. It’s likely going to have a long tail of views, too: folks will come to YouTube looking for it, and they’ll likely find their way to this version of it (even though there are many on YouTube already) because it offers more than just the documentary itself.

What I did was new, and cool, and effective, but I didn’t do anything that libraries don’t already have experience with. Libraries do movie screenings all the time, and they have their own channels of promotion. They upload videos to YouTube for the benefit of everyone. They serve as the mediator between their communities and important information, and they especially help their communities build up information literacy.

Although there are certain challenges to making this work for libraries, I’d love to see them do this (or some variant of it). From my experience, here’s what to watch out for:

With a bit of foresight, you might be able to think of events where Premieres (or a live stream, which YouTube also supports and offers much the same functionality) would be a great choice for your institution. Getting an author to tune in and review a book trailer with the community? Screening a debate and letting the community engage with each other in the chat (in a civil way)? Screening documentaries and having experts on hand to answering questions? All of these are options!

I’d love to hear how you see this playing out in your own community — drop me a line. And until next time, don’t forget to ask questions.