Ah, the great struggle of doing anything new in libraries: answering the question, “why should we care?” to the people with the money that makes things happen, in a way that they’re willing to commit it. This was touched upon briefly in Week 4 when we looked at Colburn and Haines’ downright seminal work on libraries and YouTube, but this week I want to do a deeper dive, because this might very well be the way you justify to your donors the continuation of your project.

Folks who only ever view content on YouTube may not be aware of — but hopefully won’t be terribly surprised to find out about — just how robust YouTube’s analytics are. Aside from being graphical and (somewhat) easy to understand, they also track a whole lot of things, including:

… And in turn, make these data available to users to use how they will.

Folks who work in libraries might initially feel somewhat panicked or overwhelmed at the sheer quantity of information available, and just how precise it is, but I encourage these folks to keep in mind that, at the end of the day, there’s no way to correlate a view to a specific person (very intentionally by design) unless they leave a comment that discloses their identity. Of course, with that said, I also encourage people to not become complacent, and generally stay abreast of changes to the platform (some of which are coming). In a future post, I’ll do a deeper dive into the ethics.

With all of this in mind, how can one extract meaningful data to show that content is being used in a way that’s useful to their institution? A lot of it comes down to knowing which questions to ask. While I might feature libraries, my channel isn’t affiliated with any institutions (my own way of ensuring a degree of academic freedom) — but I’ve found information that I think some institutions would like to know. To help highlight this information, here are two questions you might ask, and how you might go about answering them.

1. How do I know if people from my institution/community are viewing my content?

I assume this will be the first question that comes up in most cases, so let’s just tackle it now because it’s straightforward: Check and see where folks are finding your videos. 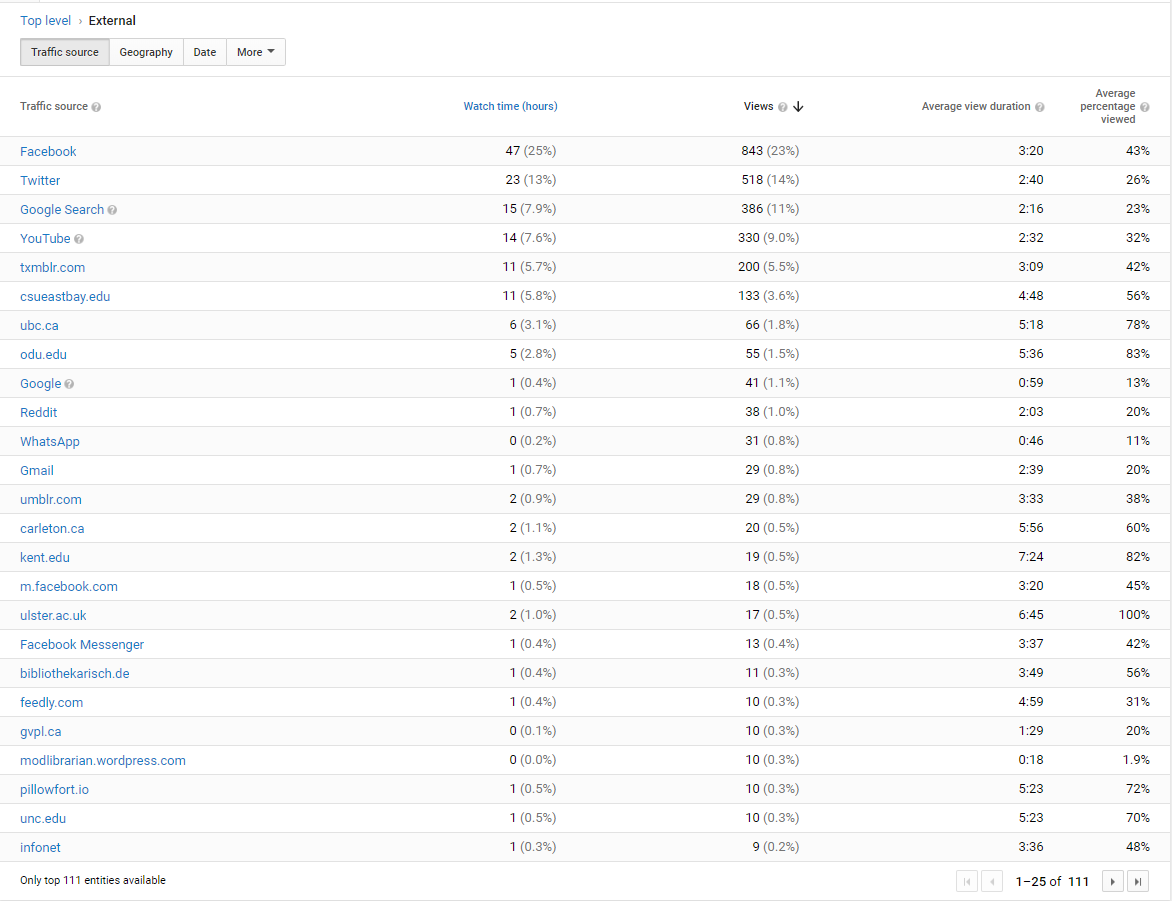 The table above shows the top 25 websites where folks have either found a link to my channel and clicked it, or found my video embedded, over the past 365 days. At first I was surprised to see Facebook take the #1 spot (Facebook is generally seen as hostile to YouTube), but logically it makes sense – the people who watch my channel are people who like me, and who likes me more than my friends and family? And so they’re also more likely to share videos,which drive views as well.

You might also be very interested to see a number of educational institutions listed: csueastbay.edu, ubc.ca, odu.edu, carlton.ca, kent.edu, ulster.ac.uk. If it were a priority, I could in turn take this information and reach out to the institutions to say “hey, I see a lot of your students are finding their way here. Are there any topics you’d like me to cover? Would you be interested in a collaboration?” etc…

You can also use the histogram above the table to see if there are any trends. The following has the top 5 or 6 university traffic sources (excluding CSU East Bay, because it had an abnormally large spike that skewed the graph):

Is it just me, or do those spikes look like they correspond to the start of terms? Hmmm, maybe this means that some of my video content is being shown to new cohorts? (spoilers: I know this is at least partially true, as one of my profs here at UBC told me as much)

You can also look at geographic data, although that’s only kind of helpful. There’s a state view which gives a rough idea of how views break down by state, but not all views have information associated with them that’s more specific than, “this view is from the United States.” 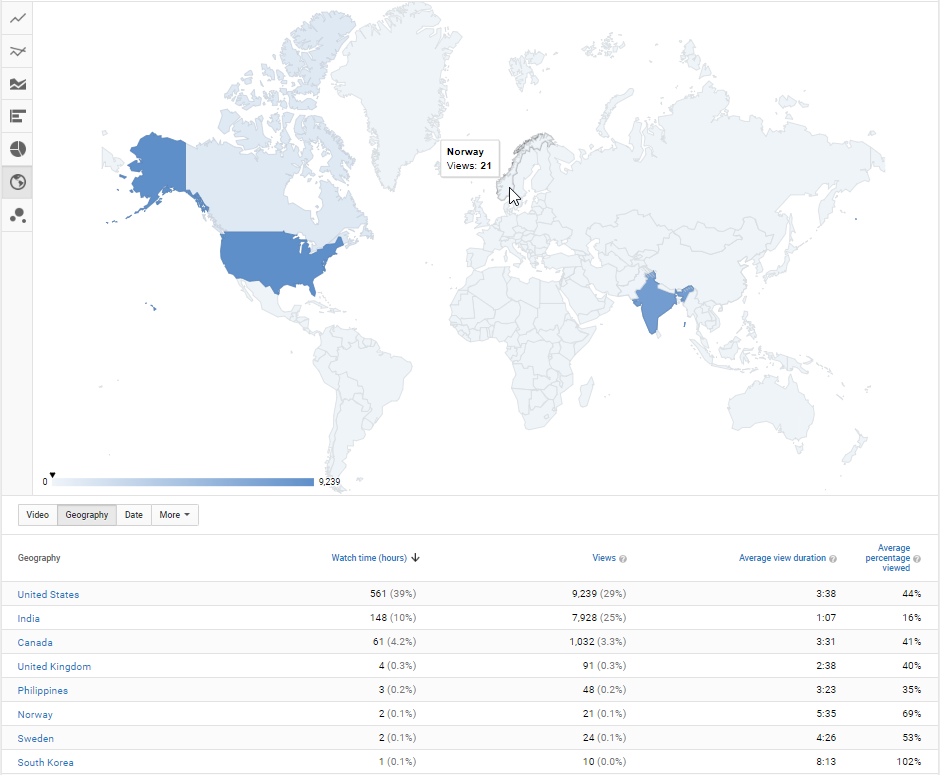 In my case, I learned that I get a lot of views from India, but on average either they’re a) very short, or b) a handful of them are all the way through, but mostly people watch for a few seconds before clicking away.

(I did some research, and what is likely the case is #1, India has a national civil service exam and librarianship is one of the career fields covered by it, so my “what is LIS” video gets a lot of traffic for that reason, but #2, the competition is super high, and so when folks in India go to YouTube to study, it’s looking for materials specifically tailored to the exam, which mine is not.)

For this question, one has to be a little bit more analytic. The easiest way to answer it is to look at Audience Retention, which shows the total watch time a video receives, and the average amount of time each view gets (so, total watch time / number of views).

This is my channel’s retention statistics. What’s notable are the following:

1) “What is LIS” has TONS of watch time (it gets about a hundred views a day), but the percentage viewed isn’t great. My guess is this is because probably because out of every 5 views: 2 watch the whole thing, 1 watches the first minute and then clicks away, and the other 2 are a toss up.

2) The videos that I have where the tone’s more conversational or natural have much better retention than videos that are more formal or obviously scripted. The exception to this is “Talking Sex Ed” and “Out on the Shelves,” both of which feature people who aren’t me. This suggests that the people who watch my videos are watching them to see me. Which feels… so weird.

3) A video’s length roughly–almost statistically insignificantly–inversely correlates to its average percentage viewed. See this graph I made below (n=15). The trend line looks pretty clear, but the R^2 leaves space for improvement – and my most recent video actually nudged it up. 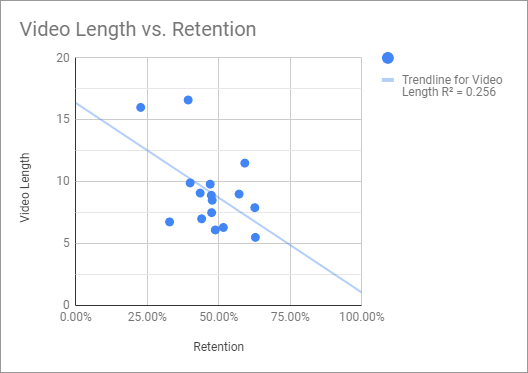 If I were to take out the Sex Ed one (the outlier), the line gets a lot more horizontal, and a lot more confident:

Aside from retention, one can also look at likes, but that’s mostly a meaningless number on its own so don’t sweat it, and it tends to fluctuate depending on how long a video has been uploaded for.

Keep in mind that inside YouTube, you can also look at metrics for videos themselves. See this gem of a chart, which shows how the retention of a given video compares to all YouTube videos of a similar length. 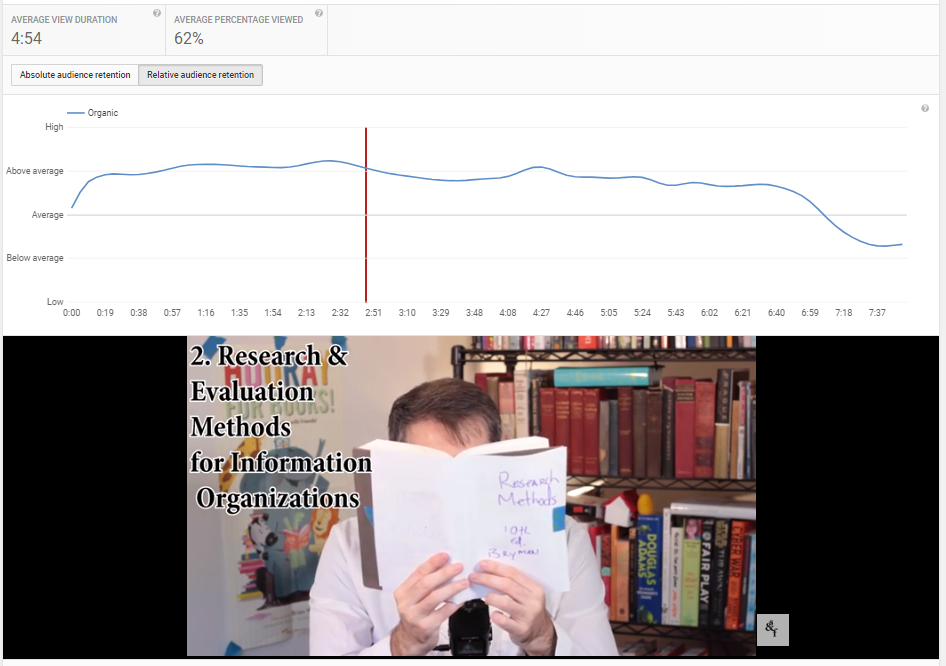 I’m happy to report that this video is killing it.

This is a very superficial dive into what you can do with YouTube’s analytics, but hopefully it piques your interest and helps you answer those two questions since you’ll get them all the time. If you want to learn more about how to do analysis like this, YouTube has a great module on it all!

Also if you have specific questions you’re not sure how to answer, feel free to reach out to me! Happy to help you think through it.