Alright, we’ve talked a little bit about what shows up on YouTube and the evolution of sundry genres on the platform, but by and large we’ve only talked about how individuals use the platform, not so much institutions. So, let’s look at the question: how are libraries using YouTube?

Note that anything that comes off as criticism in this week’s post definitely is not criticism of a given institution; we all know that libraries have some issues at the moment when it comes to funding, and making videos for the internet is not free.  So, let’s get into it.

In 2012  Selene Colburn and Laura Haines (librarians with the University of Vermont at the time) published “Measuring libraries’ use of YouTube as a promotional tool: an exploratory study and proposed best practices” in the Journal of Web Librarianship. Their research was basically a survey of videos on YouTube to get a feel for how the platform was being used within the realm of librarianship, and after looking at hundreds of videos made by folks in and out of librarianship they identified seven categories (taken from Table 2):

I love this research, not just because of how in-depth it is or the obvious overlap with my own interests, but because it wraps up with seven best practices (that are, by the way, actually practical) for libraries that are looking to get started with using YouTube for their own needs (pp.25-27):

Link to the video frequently and in relevant locations…

Showcase the library’s most unique collections…

Over the past five years, YouTube has invested a fair amount of money in making it easier to create and upload videos through letting people remix videos online (without breaking copyright), and by providing music and sound effects pre-licensed for use on the platform. There have also been major improvements in video compression and quality (a sticking point that Colburn and Haines mention in their best practices, p. 27), thanks to both software and hardware developments, and smartphones with decent cameras have saturated the market.

Where are the libraries?

So, what are the challenges that have kept libraries from getting online in big ways? It’s what you’d expect:

For one, creating content for YouTube can be a major time suck. Looking at my own channel, I aim to put out two videos per month. Here’s what that looks like in terms of time:

This isn’t to complain, only to highlight to those who didn’t know, how much work goes into each video. So… y’know, comment/like/subscribe. 🙂 #WeCreateEdu

Granted, I should also put it out there that my videos are very much on the “higher” side of production, because I make videos with the express intent of teaching people about topics in LIS, with a broad appeal not just to my local community but the whole wide world. It’s possible to not only make videos, but make good videos, in less time – it just means picking a different genre or format that’s more appropriate to the time you have.

This year I tried a curated video program about the labour behind our technology. Rather than just blathering myself, or finding and paying someone else to come in and blather on the topic, I found a bunch of YouTube videos and showed them and we talked about them. Afterwards I was thinking about how to make something like that more permanent and using YouTube playlists seemed like a good approach. So I filmed some short intro bits and grabbed the other videos we used in the class … Here at Strathcona County I do my shooting and editing on an iPad Pro instead of anything fancier. I justify it mainly by saying my role is about Digital Literacy so it helps me to think like a normal user with more basic consumer grade tools than being back in Adobe Premiere or Final Cut.

Above is the playlist that they put together, and (in my  opinion) it’s a great example of what libraries can do with just a little bit of time and nothing too fancy.

I almost lumped this one in with time since there’s a lot of overlap (folks working on videos are folks not doing other things), but they’re distinct enough to separate, so: making videos also costs money. Aside from work hours, making a video means you also need to have the equipment to make them: a camera, sound, lighting, and a computer for editing.

Lucky for us, we have most of these things in the form of smartphones already so you don’t need to sink a bunch of funds into getting a bunch of new gear (you can if you want, though!). What you should consider investing in though is audio equipment (you can get a simple recorder and/or microphone for ~$80), a tripod (~$30 each), and some kind of editing software (free! but there are also paid options).

Videography is an awful handy skillset, but it’s one that a lot of folks don’t have (or don’t think they do). The barriers to getting started are a lot lower than folks realize when it comes to actual skillsets, though. J Jack touched on this a bit above when he mentioned that he did most of his shooting on devices that folks are likely to have already, but there’s also a lot of stuff out there to help folks get started with making videos. See, for example, YouTube’s Creator Academy, which provides a number of very fleshed-out courses on everything a person might need to know about getting started.

If that all seems overwhelming though, I got commissioned earlier this year to create a “how to do online video” guide, which I then licensed for free for everyone to use. It’s very much a step-by-step, start-from-zero kind of thing, so have a look and feel free to use it, share it, and remix it as needed (it’s licensed CC-BY, so go wild).

The last barrier that exists, but perhaps the biggest, is that folks might not buy in to spending resources on creating video, because they don’t see the value. Especially given what Colburne and Haines say about being able to track a video’s impact by how many view it gets, they might look at the view counts of something like what Strathcona did and say, “why put work into something if it’s only going to be seen by a handful of people?”

My reply is this:

There’s an adage among YouTubers: just start recording and uploading, and see what happens. You don’t need to spend hours writing and researching a script; you don’t need the fanciest camera or graphics. Just pick a topic and start talking about it. You probably won’t get a thousand views in the first day with your first video, or your 10th, or maybe even your hundredth, but you will get views. And the only way to guarantee that the people you want to see it will see it, is to make it.

View counts seem nice because they’re quantifiable, but they aren’t the beginning or end of the story. What’s the point of 10,000 views, if none of them are by people in your community? On the flip side, 60 views can be orders of magnitude more than that when videos are shown to groups, particularly folks in your community, and a video that isn’t popular when it first comes out might become incredibly relevant a few months down the road.

Videos often take on a life of their own, but they won’t if you never make them.  Here’s the graph of views for my most popular video, “What is Library & Information Science?”, which now regularly gets ~70 views per day. 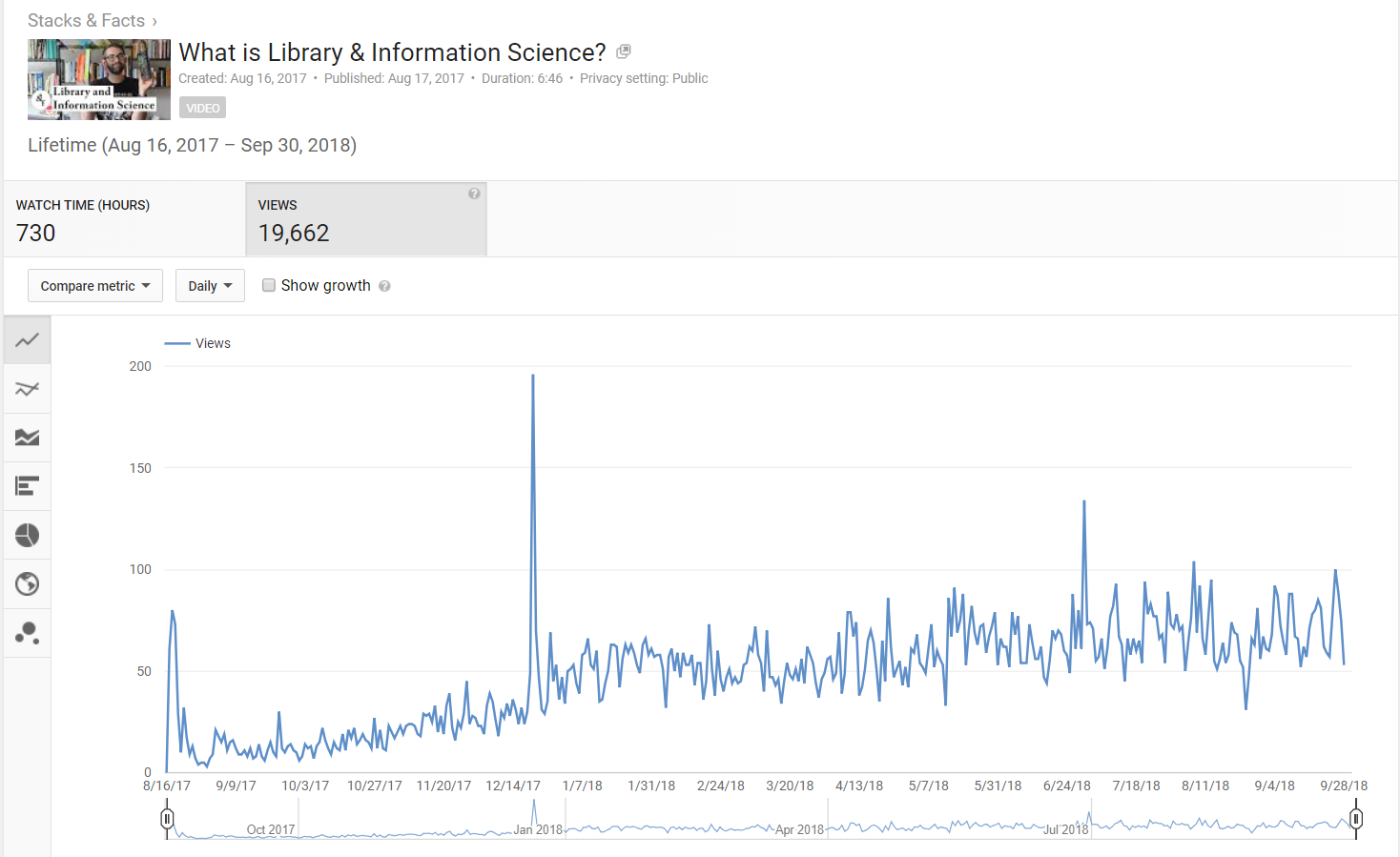 I had no idea that would happen, and yet it did. And what’s happened from that is, now, I get emails and messages from people around the world telling me, “thanks so much!” and “I had no idea, and now I’m excited to be starting LIS school!” and (the strangest/coolest of all) people who’ve come to me here at UBC and said “I came here because I saw your video.” It’s incredible, and also incredibly humbling — but it also shows the great capacity that YouTube provides in changing people’s lives.

If you want to get views: advertise your video, and put it where the people you want to see it will most likely find it:

This will help get your videos not just to anyone, but to the people who you want to see it. Ultimately, that should be the audience you’re trying to connect with, anyways, right?

Thanks for reading, and until next time, don’t forget to ask questions.

One thought on “Week 4: How have libraries used YouTube, or why not?”